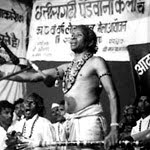 Pandvani is perhaps the most powerful and highly developed form of contemporary Performance Storytelling in the world. It has evolved over centuries in Madhya Pradesh and Punaram Nishad is considered one of the greatest exponents of this art. He was the first pupil of the late Jhadu Ram Dewangan – father of the modern school of Pandvani singing.

Backed by four musicians he sings, tells, dances, mimes, chants and acts stories from the great Hindu epic, the Mahabharata. The full cycle is usually told over eighteen evenings in three hour-long sessions. The musicians and Pandvani singers work in a tight, fast moving, call and response relationship. Punaram accompanies himself with a single stringed Tambura and the musicians play Tabla and Kanguri (drums), Kartals (tiny cymbals) and a portable harmonium. (See also Ritu Verna, below). Punaram does not speak English and his performance in a regional dialect of Hindi would need mediating by a UK resident storyteller.
Posted by Halle Smith at 12:37

The world inspires me!

I am very passionate about travelling